Why You Need Brain-Based Instruction for Your Students Kids’ Brainpower

Parents and teachers have long known that a child’s brain can soak up information like a sponge. But now, researchers have scientific evidence to back up the theory, along with advice on ways to help children reach their full potential.

Perhaps the most convincing new corroboration of the young child’s phenomenal learning capacity come from neurologist Harold Chugani, head of the PET Center at the Children’s Hospital of Michigan.

While at UCLA during the 1980s, Chugani had been examining PET scans to pinpoint the brain-seizure sites of his epilepsy patients. But he also has used these scans to observe which brain structures were metabolizing the most glucose and therefore were the most active. By examining the glucose metabolization of patients ranging from newborns to adults, Chugani uncovered the timetable under which various regions of the brain develop.

By age 2, for instance, the cortex begins operating at adult activity levels. By 4, a child’s brain is more than twice as active as an adult’s. The brain continues to consume glucose at this feverish pitch through age 10 and then slows down until age 16, when it levels off at adult values.

The child’s brain burns much more glucose than an adult’s brain. Chugani said, because it must maintain trillions of connections between neurons, more than twice as many as are ultimately retained.

“Initially, the brain provides too many connections is the cerebral cortex,” he said. “Then, there’s a waiting period to decide which ones you want to keep.”

These connections represent potential pathways that an electrical impulse may travel. Connections are strengthened by repeated use, and those that are not used become vulnerable to elimination.

“The thing that determines which connections are saved is education in the broadest sense of the term,” says UCLA’s Mich

ael Phelps, a biophysicist and co-inventor of the PET scan. “If we teach our children early enough, it will affect the organization, or ‘wiring,’ of their brains.” 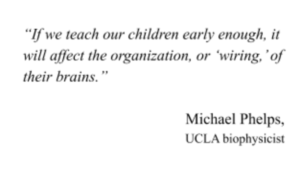 Unfortunately, U.S. education does not take full advantage of this opportunity, Phelps said.

For example, foreign language instruction is often deferred until high school, despite the fact that youngsters can learn to speak like natives – that is, to think in the language without having to translate – whereas teenagers or adults usually cannot.

When small children learn a new language, he said, “the ability to use that language is wired in the brain.” Musical training is another familiar example. “By encouraging young children to learn music and practice, you’re really doing them a big favor,” Chugani said.

“Once a child has learned an instrument, he or she can stop playing, then pick up the instrument 20 years later and do much better than an adult just starting out.”

Deprivation – the opportunity of enrichment – can also permanently affect the organization of the brain. For instance, the language centers of the cortex are not able to reach full maturity without proper stimulation, says psychiatrist Arnold Scheibel, director of UCLA’s Brain Research Institute.

That’s why so-called “feral” children who grow up in the wilderness without adults cannot master a language if they are brought back to civilization after the age of 10.

Likewise, experiments by neurobiologists David Hubel of Harvard and Torsten Wiesel of Rockefeller University have shown that cats can be blinded simply by covering their eyes during critical periods of infancy.

Although the retina remains intact, the connections between the retina and brain are permanently impaired. When blindfolds are applied to adult cats, their vision is not permanently affected because essential wiring is already in place.

The lessons from studies such as these are clear, contends Martha Pierson, a neurobiologist at Baylor College of Medicine. “Children need a flood of information, a banquet, a feast.”

Early education, she adds, “shapes the basic architecture of the computer. If you are exposed to enough things, you’ll develop a processor that can handle the flood of data that life throws at you later.”

Merlin Wittrock, head of UCLA’s Division of Educational Psychology, maintains that much of the instruction in today’s schools is based on a flawed premise.

“For a long time, we’ve assumed that children should get an immediate reward when they do something right,” he said. Courses, therefore, typically revolve around exercises broken up into tiny chunks with answers supplied at every conceivable juncture. “But the brain is much more complicated than most of our instruction,” Wittrock said. “It has many systems operating in parallel.”

In place of the usual “drill and practice” programs, he advocates complex problems without simple solutions that engage numerous systems in the brain and strengthen the connections among them. Because children may grapple with these problems for an extended period of time, the experience also should make a much more lasting impression.

Chugani concurs. Since repeated stimulation stabilized the connections between neurons, he said, “it’s better to expose a kid to a lot of things over a period of years, rather than trying to cover subjects one at a time in brief, intensive workshops.”

UCLA’s Scheibel cautions, however, that pushing youngsters too hard can be counterproductive. “When the level of exposure becomes excessive,” he said, “stress hormones are released that actually destroy nerve cells.”

A balance must be struck between too little exposure and too much. Another important issue is the proper time to begin the educational process.

Clearly, we shouldn’t force kids to learn too much too soon. “But why wait until age 5,” said Yale biologist Martha Constantine-Paton, “when the evidence clearly shows that brain development begins much earlier.”

For example, she said, before a child can begin to learn how to read, the basic neural wiring has to be in place: kids have to be able to track things with their eyes, focus attentions, and interpret symbols.

This points to the importance of preschool programs such as Head Start, she said, where children can get the stimulation necessary to prepare them for reading and other challenges ahead.

All of this is not to suggest that we should give up on education adults. “Although there is a great window of opportunity for learning up to the age of 10,
said Scheibel, “that doesn’t mean you’re over the hill at 12 or 14 or even 40.”

Even in old age, the brain retains some “plasticity.” If we stay healthy, he added, “we can continue learning right up to the day we die.”

Ready to get started?